Nikola Tesla is a well-equipped explorer for hunting/outlaw strategies. His party has well-rounded combat dice that provide combo options with his unique Tesla gun. Though his gun damages the user, acquiring a Native Shaman for healing can help offset health costs.

His Cook companion and his Strong Mind perk are invaluable to maximizing Sanity in-expedition, and his dynamite can open convenient travel routes by destroying mountains (though it costs Standing).

Blow up a mountain with dynamite (on any difficulty) to unlock this character. 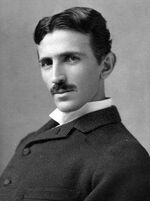 Explorers
Retrieved from "https://curious-expedition.fandom.com/wiki/Nikola_Tesla?oldid=13210"
Community content is available under CC-BY-SA unless otherwise noted.