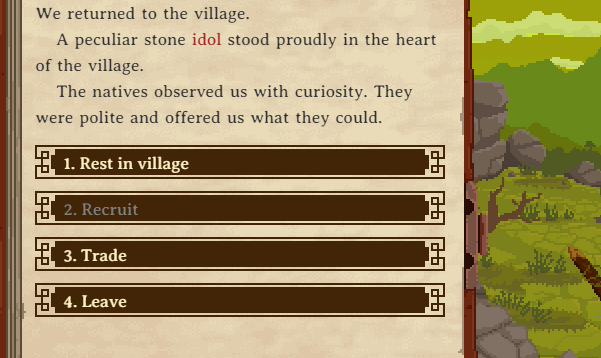 Events are the basic ingredient to making anything happen in the game. They allow you to tell the story, start battles, give the player choices and really anything that happens in the game is an event.

Events consist of commands and can invoke other events.

When creating an event or multiple events their type will determine something about how they execute.

There are multiple keywords that allow you to trigger events in different ways.

Before any event executes the requirements inside that event are checked.

Events in the game have a context that they can access to check if certain requirements are met. This allows you to select specific events depending on the current state of the game.

This context refers to a position on the map and is usually needed by event commands that change something on the map.

This context refers to a specific character in your party. This context usually exists in CharacterEffects.

Some examples for commands that need it are: reqStatusDayAge, loyalty and removeCharacter

This context refers to a specific location in the game.

These commands require a location for their effect. This context is set when triggering a location action and removed again when the diary is closed.

This context refers to a specific zone in the game.

The only command in the game using it is removeZone

These commands require a zone to which to apply the effect. The zone context exists for the evt-combat-loot event.

This event will only trigger if the party has the trx-hunt-accepted flag set.

It then unsets that flag and spaws an NPC hunter.

Then it shows the player an action to hand over a trex tooth if the player has at least one in his inventory. In that case the player loses a tooth but gets rewarded.

And it always shows the player an option to not hand over the tooth. In which case there's a large fame penalty.

Community content is available under CC-BY-SA unless otherwise noted.
Advertisement