Hero of the underground railroad and Union spy.

Harriet Tubman is a unique explorer whose stats support a pacifist strategy. She comes equipped with an overwhelming amount of climbing gear and fireworks, both of which can be used to escape/avoid enemies. If combat becomes unavoidable, her party's well-rounded dice and extra bullets help ensure survival.

Finish a single expedition (in Normal mode) with three natives in your trek. This means 3 out of the 4 possible companion slots need to be filled by a Shaman, Scout, Animal Handler, and/or Warrior. 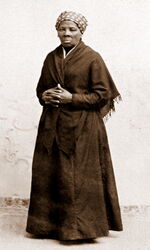 Harriet Tubman (born Araminta Ross; c. 1822 – March 10, 1913) was an African-American abolitionist, humanitarian, and - during the American Civil War - a Union spy. Born into slavery, Tubman escaped and subsequently made some thirteen missions to rescue approximately seventy enslaved family and friends, using the network of antislavery activists and safe houses known as the Underground Railroad. Traveling by night and in extreme secrecy, Tubman (or "Moses", as she was called) "never lost a passenger". In the post-war era was an active participant in the struggle for women's suffrage.

She was a devout Christian and experienced strange visions and vivid dreams, which she ascribed to premonitions from God.