Very sensitive English author with an affinity for unspeakable horrors.

H.P. Lovecraft is a unique and surprisingly formidable explorer. Though his max Sanity is only 70, his starting companions and pistol are ideal for a hunting strategy. His Scottish Soldier's perk makes their Whisky a very potent source of sanity-regeneration.

Lovecraft is the only explorer that starts out with the Necronomicon. His character has a greater probability of getting positive outcomes (portals and tome pages) from using the book, and it costs him only half the sanity of other characters to use it.

During rest periods, there is a chance that Lovecraft will add the Racist ailment to other companions.

Find the Necronomicon and use it (on Normal difficulty) to unlock this character. 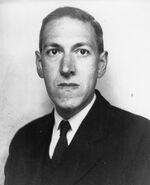 Howard Phillips Lovecraft (August 20, 1890 – March 15, 1937) was an American author who achieved posthumous fame through his influential works in horror fiction. Virtually unknown and only published in pulp magazines before he died in poverty, he is now regarded as one of the most significant 20th-century authors in his genre.