Aviation pioneer and the first woman to fly solo across the Atlantic Ocean.

Amelia Earhart is an explorer well-suited for a speedrun strategy. Though she starts with low health, her pistol, bullets, and party's well-rounded dice give her an advantage in combating necessary enemies.

Her Navigator perk assists in pinpointing the Golden Pyramid location faster. Her Animal Handler can be promoted and an additional animal companion can be acquired to maximize the party's capacity (eliminating the need to stop to stash treasure before finishing an expedition). Her Sailor can also be utilized with purchased flares to quickly scout a map.

Complete a game, ending in 1st place (earning the most Fame) on any difficulty. 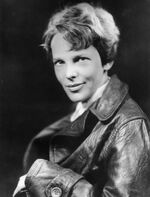 Amelia Mary Earhart (24 July, 1897 – disappeared 2 July, 1937) was an American aviation pioneer and author. Earhart was the first female aviator to fly solo across the Atlantic Ocean. She also set many other records, wrote best-selling books about her flying experiences and was instrumental in the formation of The Ninety-Nines, an organization for female pilots.

During an attempt to make a circumnavigational flight of the globe in 1937, Earhart disappeared over the central Pacific Ocean near Howland Island.

Explorers
Retrieved from "https://curious-expedition.fandom.com/wiki/Amelia_Earhart?oldid=13209"
Community content is available under CC-BY-SA unless otherwise noted.